Ecoval Sudoe is now part of the Green Project Expo (GPE), an international platform created to connect and communicate innovative projects from different economic sectors that seek to build a more sustainable world. It serves as a large-scale digital exhibition to reach a wide audience, create and disseminate events or make contacts.

Green Project Expo brings together various projects from all kinds of industries, from water treatment to transport or health, energy efficiency, technology, forest management, agriculture, oil and gas or smart cities. ECOVAL is included in the “Bio-waste and CO2” category, where it shares space with Biomotive, FRONTSH1P or Grøn Sky, favouring the creation of networks between projects with common interests.

ECOVAL’s presence in this new digital space that functions as a loudspeaker brings it closer to achieving its communication and dissemination objectives. Belonging to this platform offers a great opportunity for the project in terms of visibility, impact, development of synergies and networking. Check here ECOVAL’s page on GPE or take a look at its Twitter and Linkedin!

Every February 11, since 2016, the International Day of Women and Girls in Science is celebrated. To commemorate it, the United Nations organizes its seventh assembly with the aim of enhancing the role of women as active agents, not only as beneficiaries, in scientific and technological advances that lead us towards a more sustainable and egalitarian future.

Although progress has been made in recent years, women are still underrepresented in STEM. They account for 33.3% of researchers, hold less than a quarter of decision-making positions in educational institutions, represent only 28% of engineering graduates and tend to have shorter and lower-paid careers than their male colleagues, according to UN data. Gender equality, in addition to being a fundamental human right, is essential to meet the complex scientific, ecological and technological challenges of tomorrow with full human potential and sustainable development.

Water is the key to life

The theme of this year’s International Day of Women and Girls in Science is “Equity, Diversity and Inclusion: Water Unites Us”. It aims to put the spotlight on the millions of people who, according to UN reports, will be without access to safe water, sanitation and hygiene services by 2030. The causes will be increased demand and poor management of water resources, aggravated by climate change.

The Assembly will bring together scientists and experts from around the world at UN headquarters to discuss the nexus of water in achieving the three pillars of sustainable development: economic prosperity, social justice and environmental integrity. It aims to accelerate the achievement of the sixth Sustainable Development Goal (SDG), which aims to ensure water availability, sanitation and sustainable water management for all.

ECOVAL is also working in these directions with the reuse of sewage sludge to create high value-added bio-products such as volatile fatty acids. It is estimated that each year, sewage treatment plants in the Sudoe region generate around 1,300,000 tons of water waste that could have a second life thanks to ECOVAL.

Vanesa Paramá, a research biologist at Cetaqua’s pilot plant, who is working to give sludge a second life in line with the circular economy in the water sector, tells us about it. Thanks to her and other researchers, the ECOVAL project is a solid reality.

Anyone who wants to follow the conversation online can use the hashtags #WomenInScience and #February11. For more information you can visit the following website or the program of the event.

The Ecoval Sudoe project, strategies for the management, coordination and recovery of sludge and organic waste in the SUDOE region, enters a new phase in 2022. After successfully illustrating the technology for converting sewage sludge into volatile fatty acids, compounds that are converted into products such as paints, lubricants or adhesives in the chemical and petrochemical industry, the Ourense Wastewater Treatment Plant (WWTP) will now change its raw material to recover selectively collected organic waste taken from the containers recently installed at the Seixalbo school in Ourense. 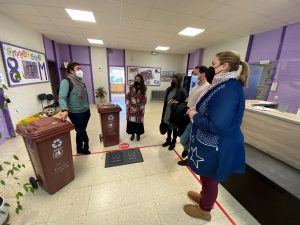 In this way, the school canteen has become a supplier of the raw material to be used by the pilot plant to obtain volatile fatty acids. Moreover, the establishment is also involved in the environmental education campaign “Another container, a brown one!”, the goal of which is to raise the awareness of youngsters as to the importance of the correct separation of waste, with an emphasis on the fifth container and the characteristics of organic waste. The CEIP Seixalbo is a public school in the municipality of Ourense that is very involved in raising environmental awareness among its students, with the organization of workshops on the correct separation of waste, the creation of a school garden, composting activities and now participation in this European research project.

Representatives from Cetaqua, the leader of the project, from the Department of Education of the City Council of Ourense and Viaqua, came in person to the school to present the project and lay the foundations for collaboration. In adition to Cetaqua, representatives from the Ourense Town Council and Viaqua, official partners committed to supporting and promoting the initiative, also attended, positioning the town of Ourense and its waste treatment plant in particular as a reference benchmark in the commitment to the development of green technologies and the circular economy.

Castile and Leon, represented in the project by the Natural Heritage Foundation, together with the Palencia Town Council and Aquona, who also support the initiative, will also be involved in the supply of organic waste through schools as a means of raising awareness as to the importance of caring for the environment while promoting the biofactory model.

The importance of the Ecoval approach 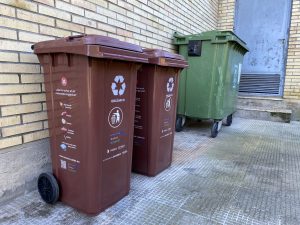 Each individual in the Sudoe region, which encompasses the Spanish autonomous communities (with the exception of the Canary Islands), the south-western regions of France, the mainland regions of Portugal, Gibraltar and the Principality of Andorra, generates 136kg of organic waste a year. This results in the generation of 11 million tons of organic waste a year, 9 million of which are food remains. Currently, 65% of this organic waste is incinerated or dumped in landfills due to the limited use of selective collection processes.

Since the project was launched in November 2020, Ecoval has paved the way for the arrival of brown containers, which should have been installed in all European cities by late 2023. Thanks to the approach promoted by the project, bio-waste will be returned to the economic cycle, thereby contributing to the European Union goal to recycle 65% of municipal waste by the year 2035.

In addition to the aforementioned partners, Santiago de Compostela University, the Galician Business-University Foundation, the National Institute of Applied Sciences of Toulousse, Nereus, Aguas do Tejo Atlantico and the Municipal Environment Company of Porto are all taking part in this challenge. The joint venture, co-financed by the Interreg Sudoe Programme through the European Regional Development Fund, also enjoys the support of 31 associated partners.

Ecoval Sudoe is now member of the Biorefine Cluster Europe network, a European network interconnecting projects and people within the domain of biobased resource recovery, striving to contribute to more sustainable resource management.

Being part of this programme means joining an active European biocluster, made up of over 27 countries, more than 30 project members, more than 750 experts, and more than 250 organizations!

Biorefine Cluster’s goals will support Ecoval’s own communication and dissemination objectives. Joining the cluster offers a great opportunity to our project in terms of visibility, impact, contribution to policy, development of synergies, optimisation of resources  and networking.

At same time, the Ecoval project and its partners will also be contributing to the success of the general goals of the Cluster and to the development of circular economy systems in Europe.